Sahaba, or ‘Companions’ was an appropriate name for this troupe which began as a circle of friends.  The Founders were Alison Grab (Alia) and Eden Torres (Zedena El-Sahtya).

Sahaba’s dance style leaned towards folkloric, but also contained elements of cabaret and raks sharqi.  In the early years, Alia and Zedena choreographed the troupe dances, and by 1978 Zedena took over most of the choreographing.  Each troupe member had input, and dances were designed to the strengths of each dancer so everyone had the opportunity to shine in performances.

Sahaba utilized some on-the-spot improvisation in their performances as well, with the dancers using a simple voice command to revert back to the choreography when desired.  This was not group improv as in ATS, but more of a way to signal the showcased dancer or dancers were finished with their section.

Thanks to Eden Torres for providing the information for this article.  Eden was also a founding partner of the Cassandra School of Bellydance in Minneapolis. 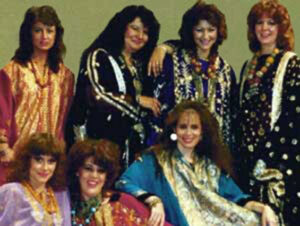